Throughout the two days of 9 and 10 October 2019 the "Atrium" Conference Centre in Polanczyk in the south eastern part of Poland was the venue of the IXth Polish Hydropower Conference HYDROFORUM 2019. In fact HYDROFORUM is the name used for a series of techno-scientific events organised by the Szewalski Institute of Fluid-Flow Machinery of the Polish Academy of Sciences (IMP PAN) in the years between 1973 and 2005. In 2000 and 2005 with substantial support of the Polish Hydropower Association (TEW). By return to the HYDROFORUM naming and logo the organisers have stressed the continuity of the well established tradition. Following the original HYDROFORUM formula the programme of the IXth Polish Hydropower Conference incorporated a study visit - this time to the Solina Dam and Hydropower Plant. Solina Dam was erected in late sixties and remains still the highest dam in the country (82 m). The hydropower plant is equipped in two reversible units (2 x 32 MW) with VATech (formerly: Escher Wyss, now: Andritz) pump-turbines and two classic ones (2 x 72 MW) with Francis turbines of Voith manufacture. With total capacity of almost 200 MW Solina plant is the third largest hydropower installation in Poland. 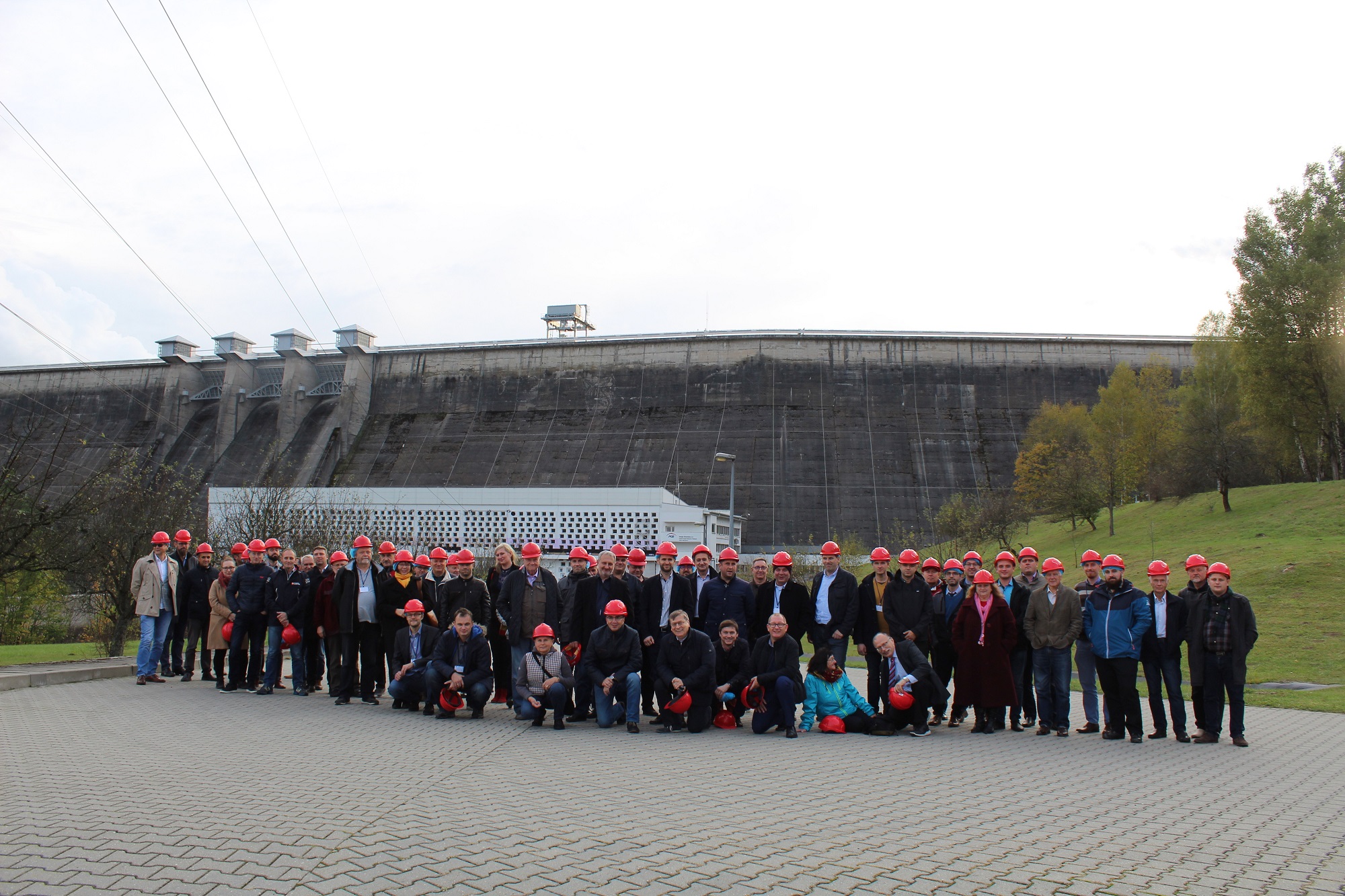 The technical visit to Solina Dam and Hydropower Plant

Hydropower has been always in the focus of HYDROFORUM events. Even if the main topic was hydraulic turbomachinery, the strategic aspects of hydropower development have been getting ever more visible since 1980-ies. Other nontechnical problems - also legal and economic ones - took a major part of the debate in the cycle of annual events initiated in 2011 and continued later on jointly by the Polish Hydropower Association together with Szewalski Institute of Fluid-Flow Machinery and the Polish Association for Small Hydropower Development. Till recently - under close collaboration with the REECO GmbH group, an organiser of the RENEXPO events within the Central-Eastern and Balkan regions, as well as the Commercial Section of the Royal Norwegian Embassy to Poland.
This year conference has been honoured by the patronage of the Polish Minister of Energy and the Minister for Maritime Economy and Inland Navigation. Technical support was provided by the PGE Energia Odnawialna SA company and the Gdansk Division of the Power Engineering. The media patronage has been taken by the ”Energetyka Wodna” and  „ZEK Hydro” journals and the CIRE power industry informative portal. The finan-cial support (sponsorship) was kindly provided by: PGE EO SA and Instytut OZE (Institute of Renewable En-ergy Sources) as well as the WTW, Neostrain and Inora companies.
The number of delegates - 90 persons – has appeared close to the record value of 2017. The number could be even higher if not the timing collision or too small time distance from such events as HYDRO 2019 in Porto or Electricity Market Conference and POLEKO Fair in Poland. The debate was divided into 7 sessions which incorporated 26 contributions and a panel debate. The high assessment of the conference quality by the dele-gates resulted among others from the high percentage of technical and techno-scientific papers. These were presented in 5 sessions focused on: small hydro and energy recovery in industrial and municipal hydraulic installations, design and exploitation of civil engineering infrastructure, operation, rehabilitation and testing of the hydropower machinery and equipment, design of hydraulic turbines and other research and development activities, respectively. The strategic and legal/economic problems formed the focus of session one whereas the position of hydropower sector in the strategic documents of Poland and other countries within the region were the main topic of the panel debate moderated by Mr Stanislaw Lewandowski, TEW honorary president. The increased input by the techno-scientific segment may be considered a success by the organisers as this was the goal pursued from the very beginning of the Polish Hydropower Conference series.
The conference was attended by representatives of the largest Polish power industry groups, service and equipment suppliers, design offices, research and research and development centres. The organisers may feel satisfied with the presence of representatives of the Ministry for Maritime Economy and Inland Navigation as well as multi-person delegations coming from Ukraine and Lithuania. The last ones included members of boards of the national hydropower associations with Mr Semen Potashnyk, president of the "Hydropower of Ukraine" association and Prof. Petras Punys, honorary president of the Lithuanian Hydropower Association. The conference was attended also by Mr George Thomson, co-owner of the Canadian company Thordon Inc. As usual, the debate was conducted with support of simultaneous interpretation.
A comprehensive conference report will be published in the end of the year in the "Energetyka Wodna" quarterly. The book of abstracts will be shortly available from the website of the Polish Hydropower Association. Since the beginning of 2020 open access to the conference presentations will be provided. The authors of se-lected contributions will be invited to prepare the post-conference papers for „Acta Energetica” and „ Transac-tions of the Institute of Fluid-Flow Machinery” scientific quarterlies.