After two times in a row, when the planned live session of HYPOSO had to be held virtually or was completely postponed, on 26 April 2022, it was finally time. HYPOSO was given a full afternoon to present its goals and already achieved results to around 80 interested participants. A big thanks goes to Aqua Media and other organizers and supporters of the HYDRO conference. It was a very well organised event, and it was so good to see many colleagues in presence again after a long time. 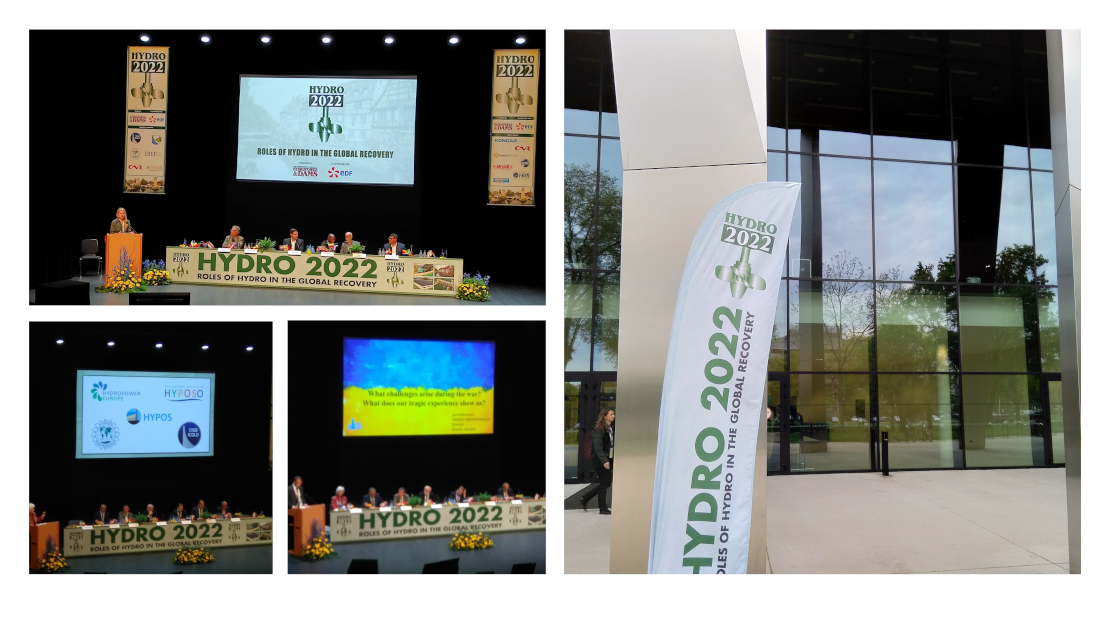 During the session, opportunities for the European industry to support the development of the small hydropower sector in Africa and Latin America were presented and discussed as they constitute the core of the HYPOSO project. The speakers presented the findings and results of this project achieved so far, including the analysis of small hydropower framework conditions and potential in target countries (i.e. Cameroon, Uganda, Ecuador, Bolivia, and Colombia), identification of potential small hydro sites (a HYPOSO Map) in these countries, and the pilot projects selected there for which the pre-feasibility studies are being developed. They also shared their experience on knowledge and capacity building activities already carried out in Cameroon and Uganda. Finally, a special emphasis was placed on the HYPOSO Platform and the promotion opportunities it provides for the European small hydropower industry.
The presentations and the discussion led to a conclusion that some uncertainty may arise while planning investments in African or Latin American countries. The problem of finding reliable and professional partners there is often raised. But while developing the HYPOSO project this turned out to be a false belief as reliable local partners have been found and the examples of their knowledge and engagement was presented. But still the need to enlarge the number of experienced hydropower experts in the regions being discussed remains an important issue. The proof for this statement could be found during the capacity building courses led in Cameroon and Uganda which raised extreme interest of participants. But even if too little number of hydropower experts can be qualified as a disadvantage regarding investments in Africa and Latin America there are many advantages which can compensate this. The most important one is the hydropower potential which, unlike in Europe, is still available in Africa and Latin America and, what’s more, there is a strong willingness to exploit it even close to nature protected areas. Other conclusions referred to the problem of lack of governmental support for hydropower development in some countries of the discussed regions (e.g. Uganda) and, last but not least, the business opportunities the HYPOSO project, and in particular the HYPOSO Platform, provides for the representatives of European equipment and service providers.

Following was the agenda of the HYPOSO session:

The HYPOSO consortium used the occasion as well to inform stakeholders from the hydro sector which were present at the exhibition about the possibility to register their companies at the HYPOSO Platform to be visible for future business between Europe, Africa, and Latin America.