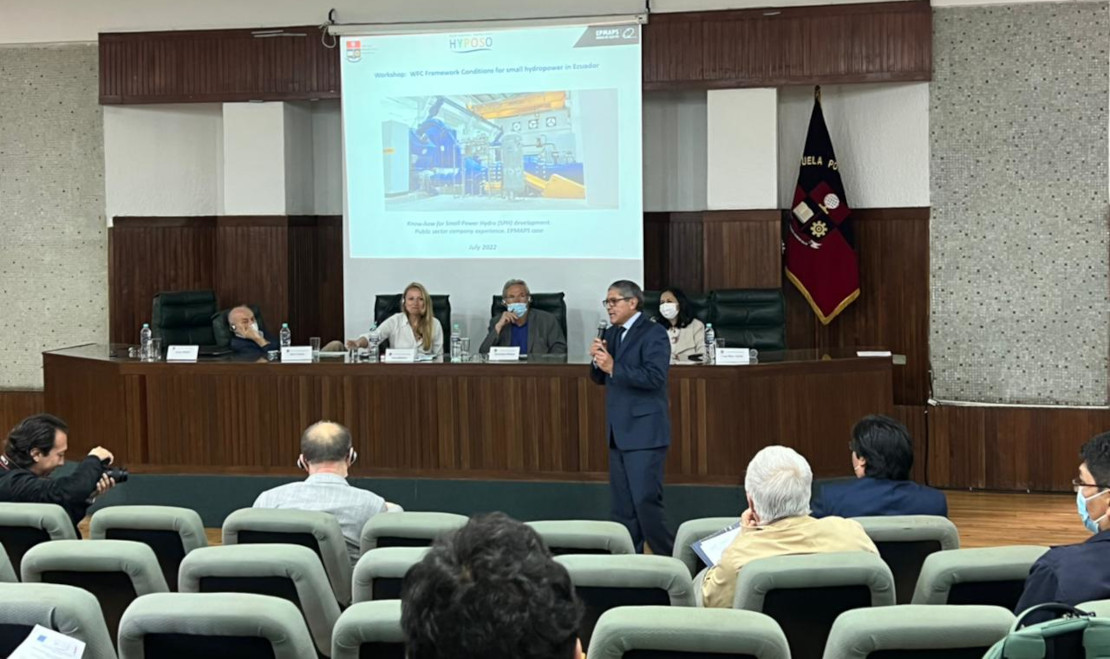 Antonio Villagómez, Sub-Manager of Hydroelectricity at EPMAPS presenting at the workshop

The third (of five) HYPOSO Workshop on Framework Conditions for Small Hydropower was held on 26 July 2022 at the Hemicycle of Escuela Politecnica Nacional (EPN) in Quito, Ecuador. It was organised by the project partners TRMEW (Poland) and EPN (Ecuador) and could welcome 47 participants on site. Ms Patricia Lorena Haro, Professor at EPN opened the event and welcomed the guests, and after that Ewa Malicka, President of the Polish Small Hydro Association had a welcome speech, after which she presented the information on the HYPOSO project as well as the objectives of the workshop. After the introduction, Luis Rios presented the outcomes of the analysis of the framework conditions for hydropower in Ecuador made within the project by the Lithuanian HYPOSO project partner VDU. Subsequently, Nino Frosio (Frosio Next, Italy) presented the three selected case studies, which were just about to be visited by the project experts in coming days. He pointed out the potential barriers these projects can encounter while being developed.
After this, Ms Fernanda Jara, Director of Expansion and Transmission of Power Generation at the Ministry of Energy and Non-Renewable Natural Resources gave an overview of the small hydropower sector in Ecuador from the perspective of the State Policy.
Two next speakers, Mr Alexandre Barahona, General Manager at CBS Ingeniería and Mr Antonio Villagómez, Sub-Manager of Hydroelectricity at EPMAPS – Quito, delivered presentations on barriers and experiences in the SHP plants development respectively from the point of view of private and public sector. 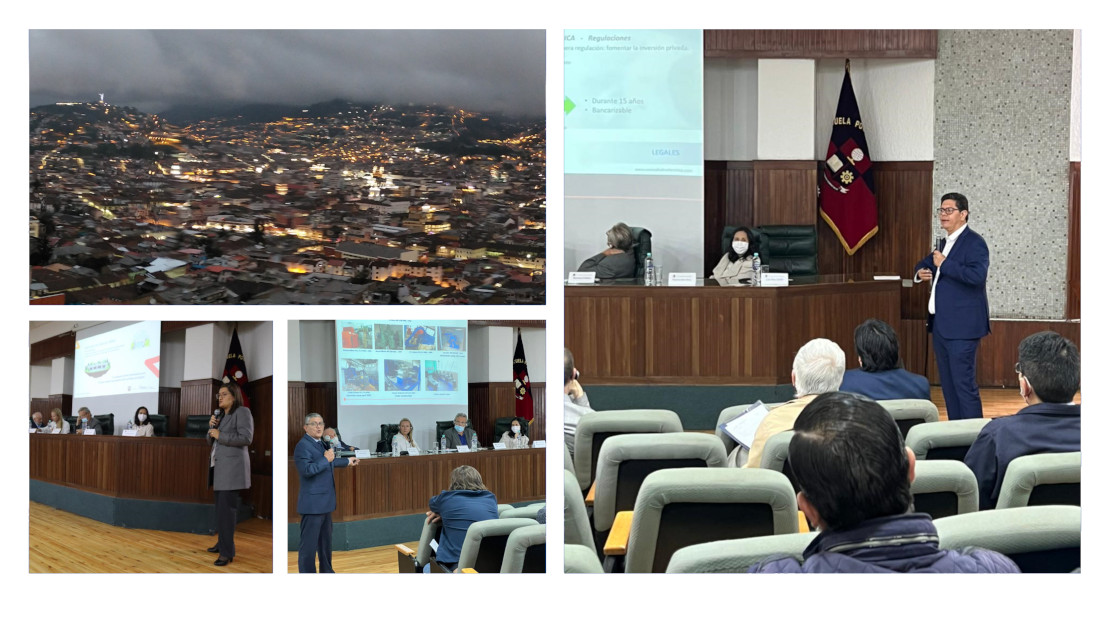 The invited speakers of the HYPOSO Workshop on Framework Conditions

It was followed by the most important part of the workshop, i.e., the discussion, moderated by Prof. Bernhard Pelikan (Frosio Next) on the actual situation and needs for hydropower in Ecuador as well as on the ideas how these needs can be met and how the development of small hydro projects can be facilitated. The views and ideas were discussed together with representatives of the two Ministries (Energy and Non-Renewable Natural Resources (MEM) as well as the Ministry of the Environment (MAAE), public and private companies, scholars, and other stakeholders such as: CBS Ingeneria y CBS Energy, EPMAPS, MAATEARCERNNR, IIGE, Hidroequinoccio EP, Constructora Nacional, EEQ, CIE, Fundacion Cice, EPN, and the HYPOSO experts.

Discussing the needs for better framework conditions for small hydropower

The matters indicated by the participants included the need of severe improvement of the legislation with regards to regulations on small hydropower including more simple approach towards this kind of projects and a clear distinction between small and large hydro. Another issue indicated by participants was the need to improve the feasibility of small hydro projects which seemed to be closely related to better access to information on projects development procedures. In this respect the recommendation of creating a small hydropower association in Ecuador was formulated. Other points mentioned within the presentations and then the discussion included the need of a stability of tariffs, at least for projects payback period, and the need to improve the allocation of the existing “green credits”. Finally, the significance of energy recuperation combining portable and wastewater systems with hydropower was underlined.

The main points of the discussion were then summarized by Bernhard Pelikan, and the participants expressed the need and will to formulate adequate recommendations to be communicated to the respective policy makers and authorities.

In the end of the workshop the outcomes of the HYPOSO project - the HYPOSO Map and the HYPOSO Platform - were presented to the participants as tools made to increase a number of investments in sustainable projects in target countries, to facilitate communication between stakeholders in Europe and Latin America as well as to stimulate the market uptake of EU technologies there.

Speakers and some participants after the workshop