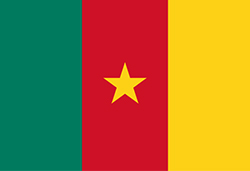 The Republic of Cameroon is located close to the equator (north of it) in Central Africa limited in the west by the Atlantic Ocean and has frontiers with Nigeria, Chad, the Central African Republic, the Democratic Republic of Congo, Gabon and Equatorial Guinea. The country has an area of 475,000 km² and a population of 22 million. Cameroon is sometimes described as "Africa in miniature" because it exhibits all the major climates and vegetation of the continent: mountains, desert, rain forest, savanna grassland, and ocean coastland. The climate varies with terrain, from tropical along the coast to semi-arid and hot in the north near Chad.
The annual precipitation is highest in the coastal and mountainous regions, with a peak during the wet season (May – November). The West African monsoon comes from south-west and brings moist air from the Atlantic Ocean. The wettest regions receive then more than 400 mm per month (exceeding 3,000 mm per year) while in the semi-arid regions in the north less than 100 mm occur.
The average electrification is around 55 % with only 17 % in rural area. To increase the electrification rate, Cameroon has privatized the sector, however private investment is still low. There are some large ongoing hydro projects, including long distance hight volage network.

It is known that SHP can be a provider for mini-grids and thus overcoming the obstacle of a weak national grid. The country is still addressing some regulation and institutional issues, including promotion of renewable energy to boost the section. With an increase of SHP as HYPOSO plans to kick off, the electrification situation in Cameroon can be improved while at the same time a dependency on foreign energy sources can be prevented.

To date, only 2 small hydro plants (18 MW total) are under construction. A number of small hydro projects being developed by private companies are still in the feasibility stage. There are three aging large hydro plants under operation and one under commissioning with a total installed capacity of 926 MW.

It is one aim of HYPOSO to assess and map the best sites for SHP in all target countries, so for Cameroon this would mean preparing the field for future development. The establishment of a high-quality database, as foreseen in HYPOSO is urgently needed in Cameroon.

Furthermore, HYPOSO will also assess the political, regulatory and financial framework conditions, and will, together with the financial expert, analyse the possibilities for better private investment stability.