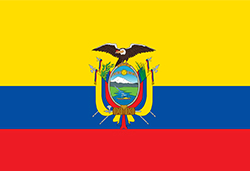 Ecuador, located on the west coast of the South America, has an area of 283.561 km² and a population of around 17.27 million inhabitants (as of 2019). Quito, the capital city at 2,850 m has an average temperature of 13°C and around 1,270 mm of rainfall annually. The climate varies with the region, most of the coast consists of wet, tropical forest, increasingly humid environment toward the north. The highlands are cut by numerous deep valleys, which bring subtropical climates to within a few miles of the more temperate areas. The average annual rainfall is variable over the country, depending on location and elevation, and ranging between 300 mm on the south coast to 5,000 mm in the Amazon Basin.

The three main water systems are the Esmeraldas River in the north, the Guayas in the south and the Amazon in the east. The Esmeralda begins as the Guayllabamba River in the highlands, flowing west before discharging in the Pacific Ocean. The Guayas forms to the north of Guayaquil, where the Daule and Babahoyo Rivers converge, the latter arises from its tributaries in the Andes. Many rivers from the Andes flow east to the Amazon River, including major rivers like the Pastaza, Napo, and Putumayo.
Ecuador has a tremendous potential for hydropower having more rivers per square kilometre than any other country in the world. Already now, around 60 % of the installed capacity comes from hydropower (national electrification rates: Total 97.2 %, Urban: 98 %, Rural: 91.6 %). 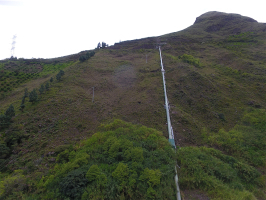 The hydropower sector in Ecuador is divided in four groups: 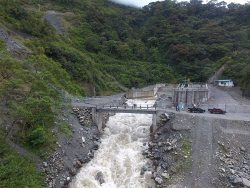 The provision of energy from hydropower is in line with the national goals, in which Ecuador not only wants to reach self-sufficiency through clean energy production but also potentially export energy to neighbouring countries. The political goal has already found its way into the Constitution of the Republic of Ecuador in which Article 89 mentions that the State will take measures aimed at achieving the following objective: Promote the use of environmentally clean technologies and non-polluting alternative energies in both public and private sector.
The gathered experts of the HYPOSO project will provide political, regulatory and financial frameworks to optimise the integration of small hydropower in the system and pave the way for a significant increase of them.